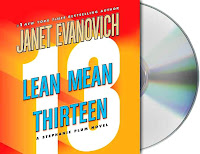 Lean Mean 13 by Janet Evanovich
Unabridged Audible download - 5 CDs
Typical, wonderful Stephanie Plum mystery. I love this series, especially in audio. The speaker does the voices perfectly and makes it twice as funny.
Posted by Kathy at 6:42 PM 2 comments:

Escape from the Carnivale - A Neverland Adventure 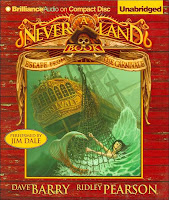 Escape from the Carnivale: A Neverland Adventure by Dave Barry & Ridley Pearson

I came accross this series a couple of years ago when the two wrote Peter & the Starcatchers, a book about how Peter Pan became Peter Pan. I loved the audio and loved the story. The two have now written several others, all aimed at older children-young teen group. This book was for younger children and I loved it as much as I have the others. It is read by Jim Dale, who reads the Harry Potter series, and who is a wonderful reader.
Posted by Kathy at 11:06 AM No comments:

I continue to be amazed by this young writter. I think one of the things I like best about her is that she writes for teens, but does not sugar-coat things. Bad things happen in her books. They turn out ok in the end, even if it is not quite the way you expected. Awesome writter - awesome book.
Posted by Kathy at 10:59 AM 2 comments:

A Girls's Guide to Witchcraft by Mindy Klasky
A cute story about a librarian who moves into a vacant house to find a witch's library stored in the basement along with the satute of a cat that turns into a real cat, then a person after she reads from one of the books. A cute little romance that doesn't get too romancy. I have the second book in the series and will read it soon.
Posted by Kathy at 9:08 AM 1 comment:

The Seance by Joan Lowery Nixon

An ok book, but nothing too exciting. A very good mystery for this age group. Lauren lives with her Aunt Mel in a small Texas town. Mel takes in a foster girl, Sara. Sara is of questionable morals. She talks Lauren into attending a seance with her. In the middle of the seance, Sara disappears. The next day, she is found dead.
Posted by Kathy at 10:19 PM No comments:

Firestorm (Book #1 of Caretakers) by David Klass
Unabridged audio - 9 CDs
A surprising good book. The main character is a little arrogant which makes him a little stupid at times, but overall a very exciting sci-fi-fantasy. The story revolves around the fact that Jack was really born 1000 years in the future after humans have destroyed the earth by destroying the oceans. He was sent backward in time as a baby to grow up (hidden from his enemies) and to find firestorm and use it to heal the world.
Posted by Kathy at 10:10 PM No comments: 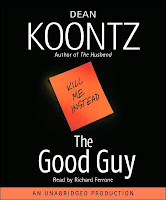 The Good Guy by Dean Koontz
Unabridged Audio - 9 CDs
Dean Koontz is rapidly straying from his "horror" type books and writing some very, very good mysteries.
Tim is just an average guy. He does masonary work and stops at the local bar for a beer before going home. A nervous little guy sits next to him and when he leaves he thrusts an envelope at Tim. Inside are a picture of a woman the little man wants eliminated and a big wad of money. When the actual assassin comes in and sits beside Tim, he gives him the envelope, minus the woman's picture, and tells him he has changed his mind to keep the money and not do the job. But the assassin isn't just any assassin and Tim and the woman in the picture are soon running for their lives.
Posted by Kathy at 12:21 AM No comments:

First let me say that I know I have neglected this site for a couple of months. Between Christmas, George Strait weekend, a bad illness and vacation. I just have had no time!! I will try to do better.


House at Riverton by Kate Morton

I received this book as an advanced readers copy from Barnes & Nobles for their "First Look" club. It will probably be the last I get, and I deeply regret that, because of all of the above. I did not meet the deadlines for the new book and I didn't do the comments and take part in the discussion like I should have on B&N. This was an awesome book. It was a mystery that wasn't completely revealed till the end of the book and then it came as a huge surprise. It held my attention almost from the start and kept it till the end. That is very rare for me these days.