I really have enjoyed this series and look forward to reading more. I've also ordered some of Myers Lighthouse Inn mysteries and his Soapmaking mystery series. Just a nice little cozy mystery. A quick read that keeps its suspense all the way through.

This was a yes and no. It started out catching my attention immediately. I loved the first few chapters and the story line sounded fascinating, but part way through it lost me to "no there are no vampires even though I know some personally" and "oh I have all these men I can't decide which one I want". I totally lost the whole thread of the plot for a while. It finally reeled me back in, but by then I had stopped to read a couple of other books. A good book, just not one of my all time favorites.
Posted by Kathy at 3:26 PM No comments: 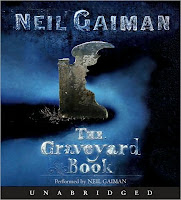 Great story about a boy who was raised in a graveyard by the ghosts that are buried there. The boy's family was murdered when he was a baby and he escaped by toddling out of the house at just the right time. His real parents were buried elsewhere, but the residents of the graveyard he wondered into keep him safe from the man who still hunts for him. Listed for ages 9 to 12, I wonder about the violence at the beginning of the story, but overall, a good listen. Neil Gaiman does the reading and he had a good voice for it.
Posted by Kathy at 9:04 PM No comments: 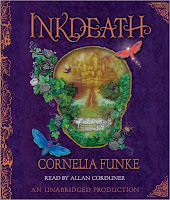 I almost did not get this book. I grew bored with the last part of Inkspell and so did not think I would like this one. I was pleasantly surprised. Though a bit violent for a children's book, good did win out in the end and the magical land of Umbra returned to a tranquil place.
Posted by Kathy at 7:12 PM No comments: 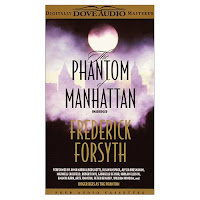 Phantom of Manhattan by Frederick Forsyth
Unabridged 4 Cassettes
I really liked this one. There was a different voice for each of the main characters and they each read different chapters. The weakest point was the voice of young Pierre. I thought it was a young girl talking until the priest he was speaking with started calling him "lad" or "my boy". They should have gotten a young boy to speak the part.
The story revolved around a young French man, disfigured and abused. Smuggled to the United States after an incident in France, he amassed a large fortune in New York City designing and building rides for Coney Island. His love of the opera and a Parisan aria led him to build the Manhatten Opera House.
Very good story. I wonder if it would have been as good a read as it was a listen.
Posted by Kathy at 7:15 AM No comments:

Rock Orchard by Paula Wall
Unabridged 5 Cassettes
Probably one of the most entertaining book I've listened to this year. I laughed over and over at this one. The story of the Bell women, the richest and most scandalous ladies (?) of Leaper's Fork, Tenneesse.
Posted by Kathy at 8:09 PM No comments:

Many Bloody Returns by Various

I usually think short story collections are ok. Nothing great, just an entertaining way to pass the time. I usually wind up skipping several stories per book, but this time I read and enjoyed each one. Charlaine Harris' Dracula Night was a fun Sookie. Twilight (not to be confused with the Meyer book of the same name) by Kelley Armstrong was a great story. The Wish by Carolyn Haines & Vampire Hours by Elaine Viets had good plot twists. Several stories were downright funny. I really liked this one.

I originally won this one in a BookObsessed swap and then found the audio at the library. The reader was fine, but I found the story lacking. Just another teen-vampire thing. Nothing outside the ordinary or particulary exciting.

My friend, Amberkatze, interviewed Rae Lori this week and is giving away a signed copy of A Kiss of Ashen Twilight to a lucky US winner and a digital version of the book to another winner from outside of the US. Stop by Amberkatze's Book Blog at http://amberkatze-amberkatze.blogspot.com/2009/02/author-interview-contest-with-rae-lori.html to enter.
Posted by Kathy at 3:25 PM No comments: