This week Amber's guest was Rachel Vincent, author of the popular Stray, Rogue, Pride, Prey series. her newest, My Soul to Take, is due out in August. Head over to Amber's and tell her what kind of cat you would like to be to enter the contest to win the Vincent book of your choice. http://amberkatze.blogspot.com/2009/06/author-intervew-contest-with-rachel.html
Posted by Kathy at 5:45 AM No comments:

This weeks interview at Amber's was with Ciara and Shane are the stars of author Jeri Smith-Ready's books Wicked Game & Bad to the Bone. After telling Amber about your pets, you will get to choose one of Jeri's books as a prize. Jeri will send the winner a bookplate so the book will be signed, as well as a signed BTTB cover flat and a shiny metal bookmark with engraved paw prints and quotes about dogs.

You can enter the contest at : http://amberkatze.blogspot.com/2009/06/interview-contest-with-ciara-shane-from.html
Posted by Kathy at 2:05 PM No comments:

*sigh* I just looked at my GoodReads pages and they are all messed up. Books that I want on my wish-list appear on my read pages and books that I have read are appearing in my wish-list audio books. What a mess!! I did a lot of work on my lists this weekend. Guess I overdid it and it couldn't handle all the changes.
Posted by Kathy at 3:15 PM No comments:

Secret History of the Pink Carnation

I won a copy of this from Amberkatze's contests. Kelley graciouly sent me an autographed copy along with a nice note and a couple of bookmarks from the series.

This is one of my favorite teen paranormal series. It still has me guessing on who are the good guys and who are the bad. Chloe and her band of rebels have escaped from the experiment and are on the run. At the same time, they are finding themselves more powerful and one has become a full fledged werewolf.
Posted by Kathy at 8:38 AM No comments: 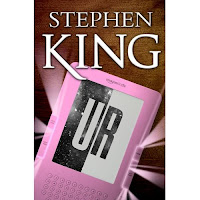 UR by Stephen King
I can never resist a new Stephen King and this one was even more intriguing because it was written for the Kindle and you can only read it on the Kindle. I think he just wanted to write a Kindle book. The main character, Wesley, purchases a Kindle. His is pink and they only come in white, but he doesn't pay any attention to that little oddity. But it comes with new books written by authors long dead and newspapers that tell the future. Nifty little item until you read where someone you love is going to die and you try to change the future to save her.
Posted by Kathy at 6:56 AM No comments:

Amberkatze interviewed Stephen Zimmer this week. Stephen is the author of the series "Rising Dawn Saga" the first book of which is "Exodus Gate" . The give away package includes an autographed copy of "Exodus Gate", a poster of the cover, an 8x10 cover art, 7 postcard sized art cards (numbered series) and bookmarks. To enter, you have to tell Amber where you are going on holiday this year or where you wish you could go. To enter, head over to http://amberkatze.blogspot.com/2009/06/author-interview-contest-with-stephen.html
Posted by Kathy at 8:40 AM No comments: 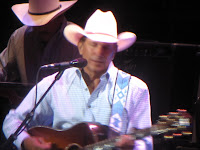 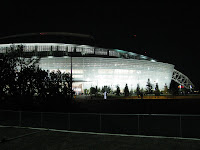 I have to admit, I'm not much of a football fan. I loved my Dallas Cowboys back in the 60s & 70s, but haven't watched much football since. But I do have to say I feel honored to have been at the first event ever at the new Cowboy Stadium.
I bought the tickets because I'm really a big, George Strait fan. If he plays anywhere in a 4 state radius, I'm usually there. Leann, Blake & Reba were a huge bonus. I really like all of them as well.
The stadium is massive, acoustics were bad, but George was awesome. I got to see an assortment of other well knowns as well. Jerry Jones suite was right behind where I was sitting. During the course of the evening, he was joined by Jimmy Johnson, Bill Bates, Troy Ackman and Senator Kay Baily Hutchinson.
A truly magical afternoon and evening. The roof of the dome opened to the sounds of George singing "Texas". How fitting.
Posted by Kathy at 12:34 AM No comments:

This series just gets better and better. Now that the werepeople have seen the world is semi-safe for vampires, they decide it is time to make their presence know. There were several plots running in this book and sometimes I fogot about one while reading about another. Overall, I would give the book a must read for all Charlaine Harris fans.
Posted by Kathy at 12:29 AM No comments:

Sif was the wife of Thor and the mother of Uller. She had long, following hair the color of wheat and was therefore associated with the harvest. She was the earth mother and symbolized spring and summer. Loki attacked her one day and cut off her hair, thus posing a dire threat to crops and the harvest. Thor was outraged and demanded that Loki make amends or endure a severe beating. Loki had the dwarf Dvalin make her new hair from the finest magical thread.

Jera's meaning is the year. The object is they scythe and her color is black.

Meaning: One year. Gaining back what is rightfully yours. Legal matters, obligations and harmony.
Reversed: Completion cannot be rushed and taking a situation stage by stage.
Posted by Kathy at 6:49 AM No comments:

Agatha Raisin & the Haunted House by MC Beaton
Unabridged on 4 cassettes
I laughed so much listening to this book. Middle-aged Agatha has a reputation for being a "Miss Marple". A designation she resists because Mrs Marple was old and Agatha is trying her best not to be. Madness and mayhem follow her as she attempts to flirt with her new next door neighbor while trying to solve the mystery of the haunted house.
Posted by Kathy at 9:33 PM No comments:

Awesome read. Two rival mercenaries are hired for a suicide mission into vampire territory. There Turquoise once again meets up with the vampire who killed her family and made her a slave. She escaped from him once, now she lives to destroy him. An amazing book for an author who was 18 when this one was published.
Posted by Kathy at 7:00 AM No comments: