One of the best teen book I've listened to in a while. The reader's voice bothered me a little at times, but the story itself made up for any failings of the reader. Enter Three Witches is the story of Mary, daughter of the Thane of Cawdor. Mary lived with Lord and Lady Macbeth. After the Macbeths murdered King Duncan, Mary plays an important role in helping King Malcom regain the throne.

This is probably my favorite of this series so far. Pepper is coming to terms with being able to see and talk to the dead. She also falls in love with her dead guy who helps her on her way to getting on with her real guy(s). I really look forward to #4.
Posted by Kathy at 12:45 AM 2 comments:

Demon in My View

Demon in My View by Amelia Atwater-Rhodes
WOW! What can I say - another awesome book by Atwater-Rhodes. She is a teen writing for teens and what puts her way ahead of a lot of other paranormal teen writers is that she is not afraid to let bad things happen in her books. They are dark, they are sometimes scarey, and sometimes people get killed or turned to paranormal creatures. This is the second book I've read by this author and I want MORE!!
This one was sent to me as a surprise by my dear friend Amberkatze from Austria.
Posted by Kathy at 6:08 AM 1 comment:

Rune: Othila (oath-awe-law) #23 ; The god Vali and belonging to the god Tyr.
An amazing infant, Othila was said to have developed so quickly that he grew to his full height on the day after his birth. He is the son of Odin and Rind. He is known as the god of light because he hunted down and killed Hodur, the slayer of Baldur, afterwhich he took his seat in the hall of Gladsheim. He was one of the gods that survived the end of the world. In Christianity, he became Valentine because he was known for his archery and as the god of light.
Object: seat
Symbol: vegetation
Color: red
Meaning: inheritance, legacy, land, property
Reversed: an accident, damage, mechanical equipment failure
Posted by Kathy at 5:58 AM No comments:

Got Fangs? by Katie Maxwell

Cute idea for a book. A girl who can know all about a person just by touching them has a mother who is a witch. After divorcing her father, the mother takes the girl to Europe and joins a gypsy traveling circus full of witches, vampires, demons, etc. But that is it. There is no real substance and no real story. I have book two of this series too, but probably am not going to read it.
Posted by Kathy at 5:54 AM 1 comment: 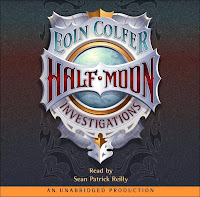 Half-Moon Investigations by Eoin Colfer
Unabridged Audiobook -- 6 CDs -- 7 hrs 17 min
Read by Sean Patrick Reilly
When this one first started, I did not think I would make it through the first CD. There is only so much graphic description I can stand of someone with an extremely runny nose. Why some adults think children are fasinated with this, I will never understand. Most kids I know are as grossed out by this sort of thing as I am. However, I did go ahead and listen and that part only lasted through about the first half of the first CD. The rest of the story of good. It is clever story about a 12 year old who wants to be a detective. He solves crimes around the school yard, who took this kid's lunchmoney, where someone left their books, etc. Then came the big case and not only does Half-Moon have to solve it, he has to clear himself as well as he was framed for the crime.
Posted by Kathy at 6:39 PM No comments:

Poltergeist by Kat Richardson
This is the second in the Greywalker series and I liked it as much, if not better than the first one. Harper Blaine has been able to enter the "grey" world since almost having died herself. The grey world is a world of echoes from past lives and times. The grey world exsists as overlapping and layered levels of our own world. In Poltergeist, Harper tracks down a killer who is using a ghost to help him carry out his crimes.
Posted by Kathy at 6:42 PM 1 comment: 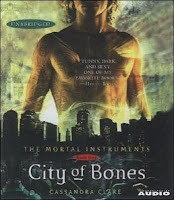 I really enjoyed this story and look forward to listening to more in this series. 16 year old Clary finds out she is not really a mortal, that she is really decended from the shadow-hunters, warriors who try to rid the world of demons and other forsaken. I was warned against this book by a few people because the author tends to "borrow" quite heavily from other books. I did find a few instances where certain terms or ideas were familar to me from other books, but for the most part. I really liked the book and will listen to the others in this series.
Posted by Kathy at 10:08 PM 1 comment: