Mistress in the Art of Death 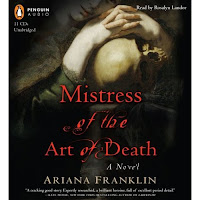 Mistress of Death #1: Mistress in the Art of Death by Ariana Franklin read by Rosalyn Landor, unabridged 11CDs

I have to say I was very intrigued by the subject matter of this excellent audio. A serial killer of children during the time of Henry II of England. A doctor skilled in the art of reading a dead body to find clues of how the person died is called from the School of Medicine in Salerno as a favor to Henry II. But a Master of Death was asked for and it was a Mistress of Death they received. The book lived up to the interest it sparked in me when reading the synopsis, so much so that I am now listening to the second book in the series, The Serpent's Tale.
Posted by Kathy at 1:47 PM No comments: