City on the Edge of Forever 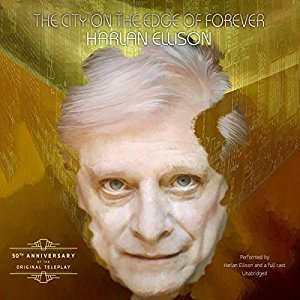 City on the Edge of Forever by Harlan Ellison

Ellison spends the first 3 or 4 hours trashing Star Trek and Gene Roddenberry. The last part of the book is taken up by at least 4 different versions of the screen play of which all sound pretty much the same to me. I can believe that the original screen play won the Hugo Award, it is a great story, but this was a really lousy audiobook. I returned it.
Posted by Kathy at 6:38 AM No comments: 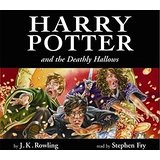 Ok, so I'm involved in a Sci-Fi/Fantasy award winner reading challenge and this installment of the Harry Potter series won the Andre Norton Award for best YA Sci-Fi/Fantasy Book of 2008. I'm amazed that all six of the other books did not win as well. I am supposed to write a review of the books I read and post them somewhere, so that is why there are suddenly so many reviews being posted on this site.

After reading the first book in the series, I devoured the other six as soon as they were published. I also listened to all seven narrated by Jim Dale, the US narrator. A discussion on one of my book message boards lead me to listening to all seven again, this time by the British narrator, Stephen Fry. Who does a better job? Hard to say. The books themselves are so good that I think any decent narrator would do a good job. Both Jim Dale and Stephen Fry are very good narrators. I enjoyed these books as much this time as I did the first time. Something different - as I finished reading a book, I'd re-watch the movie. It was fun to see the differences in the book and the movie. The last 4 books should have had 2 movies each made from them, because so much of the books had to be left out. (Does that sentence make sense?)

Deathly Hallows brings the series to an end. It ties up all the loose ends. JK Rowling is a master at dropping in something that doesn't seem that important at the time and then later on, it becomes a very big deal. I loved all of these books. I love that at the very end of this one, we get a glimpse into the lives of the characters as adults and the post-Voldemort wizarding world. I hated to see the series end, but it was time. There were not so many books that reading them got old or stale and not so many that  it would be a chore to re-read or re-listen to over and over.