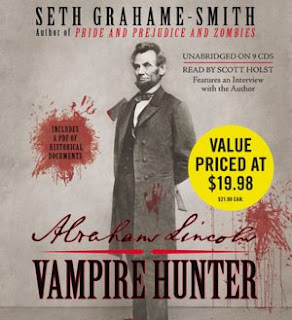 I was not going to read this book. I had read Pride and Prejudice and Zombies by the same author and disliked it. Not so much for the content, but for the fact that it was sold as being written by Jane Austen and Seth Grahame-Smith. I doubt very much that Ms. Austen would have approved. So one could say I was "prejudice". But I had several people tell me how good this book was and it was coming from people that I would never have thought would read a book about vampires, so I thought I should give it a try. I was amazed. The story captured me on the first CD and kept my attention throughout. The narration was very good, exactly right as a matter of fact. I enjoyed the interview with the author at the end and it was interesting to see where he got the idea for the story. A very good read and I'm looking forward to watching the movie.

Indiana, 1818. Moonlight falls through the dense woods that surround a one-room cabin, where a nine-year-old Abraham Lincoln kneels at his suffering mother's bedside. She's been stricken with something the old-timers call "Milk Sickness."
"My baby boy..." she whispers before dying.
Only later will the grieving Abe learn that his mother's fatal affliction was actually the work of a vampire.
When the truth becomes known to young Lincoln, he writes in his journal, "henceforth my life shall be one of rigorous study and devotion. I shall become a master of mind and body. And this mastery shall have but one purpose..." Gifted with his legendary height, strength, and skill with an ax, Abe sets out on a path of vengeance that will lead him all the way to the White House.
While Abraham Lincoln is widely lauded for saving a Union and freeing millions of slaves, his valiant fight against the forces of the undead has remained in the shadows for hundreds of years. That is, until Seth Grahame-Smith stumbled upon The Secret Journal of Abraham Lincoln, and became the first living person to lay eyes on it in more than 140 years.
Using the journal as his guide and writing in the grand biographical style of Doris Kearns Goodwin and David McCullough, Seth has reconstructed the true life story of our greatest president for the first time-all while revealing the hidden history behind the Civil War and uncovering the role vampires played in the birth, growth, and near-death of our nation.
Posted by Kathy at 7:39 PM 3 comments: 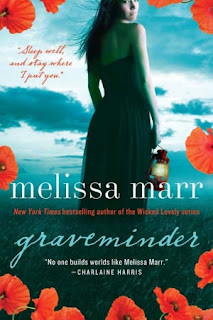 One of the best books I've read all year with an ending that truly surprised me - which, to be honest, doesn't happen very often. A good paranormal that almost borders on horror.


Three sips to mind the dead . . .
Rebekkah Barrow never forgot the attention her grandmother Maylene bestowed upon the dead of Claysville, the small town where Bek spent her adolescence. There wasn't a funeral that Maylene didn't attend, and at each one Rebekkah watched as Maylene performed the same unusual ritual: She took three sips from a silver flask and spoke the words"Sleep well, and stay where I put you."
Now Maylene is dead, and Bek must go back to the place she left a decade earlier. She soon discovers that Claysville is not just the sleepy town she remembers, and that Maylene had good reason for her odd traditions. It turns out that in Claysville the worlds of the living and the dead are dangerously connected; beneath the town lies a shadowy, lawless land ruled by the enigmatic Charles, aka Mr. D. If the dead are not properly cared for, they will come back to satiate themselves with food, drink, and stories from the land of the living. Only the Graveminder, by tradition a Barrow woman, and her Undertaker—in this case Byron Montgomery, with whom Bek shares a complicated past—can set things right once the dead begin to walk.
Although she is still grieving for Maylene, Rebekkah will soon find that she has more than a funeral to attend to in Claysville, and that what awaits her may be far worse: dark secrets, a centuries-old bargain, a romance that still haunts her, and a frightening new responsibility—to stop a monster and put the dead to rest where they belong.