Win a copy of Wicked Game

A friend is running a contest on her blog and the winner will receive an autographed copy of "Wicked Game" by Jeri Smith-Ready. To enter go to her blog at : http://amberkatze-amberkatze.blogspot.com/2008/06/interview-with-author-jeri-ready-smith.html

I tried to run a picture of the cover of the book, but for some reason BlogSpot won't let me enter pictures today. Sorry!
Posted by Kathy at 6:46 PM 1 comment:

This books picks up where My Big Fat Supernatural Wedding leaves off. Most of the stories were really cute. I only felt one or two were great. "Where the Heart Lives" by Marjorie M. Liu was awesome. Very well written and held my attention from the first. By far my favorite.

Thought I should mention that I did a more extensive review of this book for YankeeRomanceReviewers
Posted by Kathy at 9:18 PM 1 comment:

Kiesha'ra #5 Wyvernhail by Amelia Atwater-Rhodes
What to say about this one.... I'm glad I read the series, but it had it's ups and downs. The ending was a bit muddled and I don't really understand how or why it worked out as it did. I really can't say a lot without giving away the ending, but with all the throne claiming and recending and overtaking, I'm amazed at the forgiveness that occured in the end. Overall a good series. Atwater-Rhodes continues to be one of my current favorite authors.
Posted by Kathy at 8:37 AM 3 comments:

I have began naming my World of Warcraft characters after runes. Today I named my new blood elf mage "Kaynaz" (Kanaz and Kenaz were already taken). The rune's ancient meaning is boil or sore, something I had forgotten when I went to name today's toon or I might have reconsidered. The more modern meaning is torch. Since my toon is a mage, she can throw a pretty good fireball, so torch seems much more appropriate. It also symbolizes knowledge and enlightenment. It is the sign of discomfort (which I mean for my enemies on WOW to be!)

Kenaz is the rune of Skuld, one of the three Norns or Fates. She was the norn of the future. She also rode with the Valkyries to collect fallen warriors on the field. Her animal is the owl, her tree the pine and the color associated with her is blue.

Reversed: Loss, endings, casting out things from the past.

What can I say? I loved this book about scientists studying whale song and the wild situations they find themselves in. Cona is now one of my all time favorite Moore characters.
Posted by Kathy at 7:48 PM No comments:

Gefjon is the goddess of unwed women. He dwells in Frigg's palace where she welcomes them when they die. They are made comfortable and happy and will be forever under Gefjon's protection.

The main legend surrounding Gefjon is the agreement she made with King Gylfi of Sweden. Odin sent Gefjon to the king requesting ownship of some land. Gylfi told Gefjon that she could have all the land she could plough in one day. She turned her four sons into oxen and ploughed a huge piece of land. The oxen sons then dragged the land out to sea where it became the island Seeland.

Gefjon means the giving one and therefore Gebo's meaning is gift. The object associated with Gebo is glass and the color blue. The animal is the ox.

It's meaning is a good partnership or relationship, love, and gifts bestowed. It can also mean emotional problems or disharmony depending on what runes are cast with it.
Posted by Kathy at 6:25 AM No comments:

You Suck by Christopher Moore

Alright, after my tirade on books I don't want to read, let me tell you about the one I finished today. This was a fun book even though I got a bit confused with all the biting and vampire turning that was going on. I'm still not sure what happened in the last chapter or who the bronze statues are, but I loved it and will read (or listen to) as many Christopher Moore's as I can get my hands on!

I started reading a book called Innocent's Story today and it is so bad I'm not going to offer it to my friends on BookObsessed. I'll list it on Bookmooch or just throw it away or something. I've also abandoned Club Dumas because I started it, read 100 pages or so a couple of weeks ago, laid it down and now that I picked it back up I realized that it made such an impression on me that I can't even remember what it was about. I read several short stories from I Am Legend-Hell House and I'm going to send that one on it's way. I can't imagine why I'm so picky today!
Posted by Kathy at 10:07 PM 2 comments: 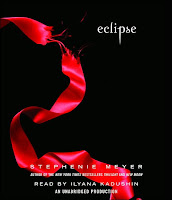 Excellent! She tied everything in the series up very neatly. I'm not quite sure I like the way it ended. I probably would have done it differently, but still, awesome book, awesome series. This will go in my permanent collection. I have an audio of Meyer's most recent book "Host". I will probably listen to it after Duma Key.
Posted by Kathy at 12:53 PM 2 comments:

Bloodsucking Fiends by Christopher Moore
Christopher Moore is rapidly becoming one of my favorite authors. An old vampire wanting companionship turns Jody into a vampire but leaves her alone to see how she reacts. She reacts by picking up a guy to help her take care of her daytime needs. The result is hilarity that only Moore can write.
Posted by Kathy at 10:04 AM 1 comment:

In the Palace of Repose

In the Palace of Repose by Holly Phillips
One of the best books I've read in a very long time. It is a book of short stories, but they are almost all excellent reads. I can't even pick out a favorite - they were all that good!
From Barnes & Noble: In the Palace of Repose is a collection of nine such stories, ranging from the delightfully fantastic "In the Palace of Repose," to the delicately horrific "One of the Hungry Ones," to the hauntingly literary "The Other Grace." Here indeed are young women, and young men, who have seen too much, and who have been abandoned to wrestle alone with the strange, the wonderful, the terrifying. Some triumph, some tragically fail. Most struggle on beyond the boundaries of their stories, carrying their wonders and horrors into their lives, into their worlds—worlds, and lives, startlingly like our own.
Posted by Kathy at 8:46 AM No comments: